Revelation: Holding the Mind Steady in the Light of the Soul 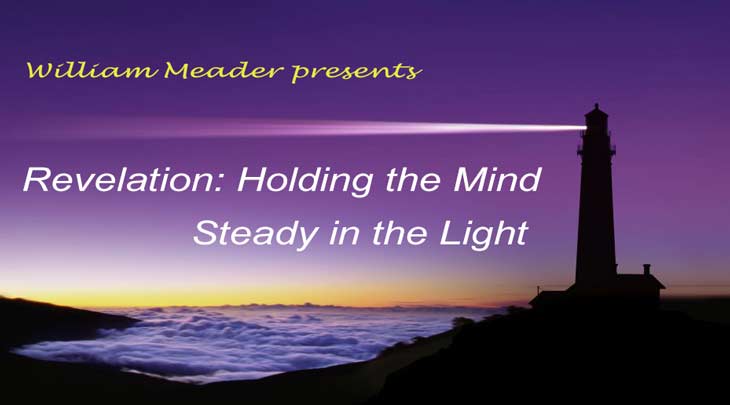 This is a video presentation of a two-day workshop conducted in Ireland entitled, Revelation: Holding the Mind Steady in the Light. It is a deep and insightful seminar dedicated to helping people understand the nature of the soul’s revelations as they crest upon the shores of the mind.

This pre-recorded seminar is ideal for those who would like to learn more about the spiritual journey as it is conveyed in the Esoteric Philosophy. In addition, because it is divided into 20- to 30-minute modules, it is very conducive to groups of people who meet to study this profound philosophy.

Please view the first module free of charge to sample of the type and depth of information presented. At the time of registration, you will also be given an opportunity to download an audiobook version of the entire seminar.

I hope you enjoy it.

In this program introduction, a broad overview is presented of the topics that will be covered in the following 22 sections of the complete series.

Quotations from the writings of the Tibetan Master, Djwhal Khul (through the writings of Alice A. Bailey) are used to establish a foundational understanding of the spiritual aspects of light and the evolution of human consciousness. The three Periodical Vehicles are introduced and distinguishing characteristics of each are presented. Includes link to course handouts.

William answers questions from the audience about reincarnation and the process through which the wisdom earned during the life is stored within the causal body.

The Seven Rays of manifestation are presented and how the quality of light varies with each ray type. Soul types reflect the quality and attributes of the ray they manifest and these attributes are reviewed for each of the individual Seven Rays.

William answers questions to provide clarification on the Seven Rays as they relate to the soul, personality, emotional, mental and physical bodies.

The audience is asked to ponder a question: What is going on in your life now that you need more insight about in order to move effectively forward? William reads a quote from the Tibetan Master Djwhal Khul and brings the session to a close with a short meditation to facilitate revelation of the soul and its intention.

As understood in Esotericism, revelation is discussed and compared with the views held by the mystics of old. The principles of God transcendent and God immanent are distinctively presented. Details regarding the stages of soul-infusion and the art of thought-form building are also introduced.

Thought-form building is explored on a deeper level and the first three rules of White Magic are presented. These rules involve the beginning stages of the creative process as the soul seeks to meditatively build thought-forms to inspire the personality.

William answers questions from the audience on the creative process, elementals and efficiency of thought-form building. The process for working with the devic kingdom to efficiently build thought-forms is discussed in depth to ensure the construction of undistorted ideations.

Revelatory prophecies of the 21st Century, as communicated from the Tibetan Master, are presented and discussed.

The prophesies of the 21st Century as they relate to science are discussed. These include the true nature of electricity and its potential for revolutionizing humanity, the art of healing, the development of consciousness, as well as a deeper understanding of death and the dying process.

In this module the agenda for Day 2 of the workshop is presented. The Sanskrit term for the bridge between the soul and the personality, the Antahkarana, is discussed as are the methods for developing it. The Point-of-Tension is also introduced, as is the establishment of a Ring-Pass-Not during the meditative process of penetration – polarization – precipitation.

The structure of the Antahkarana, which includes discussion of the life thread (Sutratma), the consciousness thread and the creative thread. William answers questions from the audience about meditation, the contrast between sleep and meditation, and a foundation for understanding divinity through the evolution of the soul are explored. The cycles of time and periodicity are also explained.

The fundamental principle of Hylozoism as an essential concept within Esotericism is presented. Planetary incarnations, the redemptive path, and methods for verifying the Esoteric Philosophy while living it are reviewed.

The importance of establishing a Point of Tension in the meditative process is explained in relation to focused immovable will. The method for facilitating intuitive realization by establishing and holding a Point-of-Tension during meditation and daily life are also discussed.

Questions from the audience are taken about the meditation done in Part 16. Tools for improving the richness of meditation are discussed, as are the interplay of the chakras and alignment with the high point during meditation.

Purification of the lower nature is presented as an essential element of the initiatory process. Initiations are discussed as milestones of mastery over the lower vehicles beginning with the First Initiation, known as The Birth of the Christ within the Heart.

Considered one of the most difficult of the initiations, the second (also known as The Baptism) requires mastery over the emotional body. The middle principle of uniting pure spirit and form is discussed as a component of this initiatory step.

The Fourth Initiation, called the Crucifixion in the Christian Tradition, or the Great Renunciation in the East, is explained in depth. The Dark Night of the Soul experience is presented as part of this initiatory step. Questions about initiation from the audience are taken.

While 2012 is never mentioned in the Esoteric Literature, the Mayan Calendar holds significant interest for humanity. The Mayan culture’s contribution of service as Time Keepers is presented, as is a concept of the mathematics of time. The alignment of the planet earth with the galactic center of our universe, which will take place in December of 2012, is explained as a time of great opportunity for humanity. The significance for humanity of the Venus transit and the Festival Week of the New Group of World Servers is also discussed.

In this final module, the initiatory status of the planet Earth is explored in the context of right relationship with the physical dimension of life. Relevant societal issues such as economics and climate change are used as examples. The astrological aspects of planetary influences on current and future events are also explained in relation to the planet Uranus.