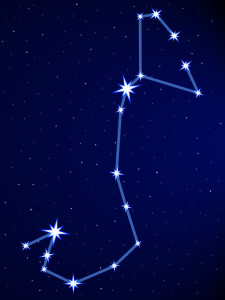 ~ The Fourth Ray of Harmony through Conflict ~

After an awakening to the soul deep within, the Sign of Scorpio has profound relevance in an individual’s life.  Indeed, all who are walking the Path are subject to the influence of this powerful sign.  This is true whether or not Scorpio is emphasized in one’s natal chart.  Sometimes called the sign of the test, Scorpio stages the transformational challenges that we each must face when on the road to enlightenment.  It is therefore not surprising that the rayological energy that underpins Scorpio is the fourth ray, also known as the Ray of Harmony through Conflict.

Deep within the recesses of human consciousness, the fourth ray stages a conflict between the disciple and the shadowing and hidden dimensions of his or her mind.  Whether referring to repressed memories from the past, unwholesome impulses that have historically been kept at bay, or various unconscious patterns of perception, Scorpio supports the transformation of these tendencies via the fourth ray.  With the assistance of Pluto (one of Scorpio’s ruling planets), these hidden factors of human consciousness are lifted into the light of day.  By so doing, the disciple is able to consciously recognize them.  From there, the painful work of psychologically transforming these undesirable patterns can begin.

Essentially, Scorpio is the sign that archetypically emphasizes the recognition and redemption of the shadow within each of us (to use a Jungian term).  Through the fourth ray, Scorpio stages inner tests that ultimately can release one into a higher and wiser scope of consciousness.  It forces the disciple to see the unwholesome patterns of consciousness that tend to inhibit the soul from fuller expression, and to unwaveringly commit to transforming them.  Phrased in the arcane language of ancient occultism, Scorpio stages the battle between the dweller on the threshold (unredeemed aspects of the personality) and the Angel of the Presence (the loving intelligence of the soul).