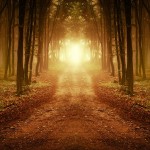 ~ Enlightenment and the Great Renunciation ~

The Fourth Initiation marks a moment of spiritual triumph. When considering the countless incarnations that an individual will live, this initiatory opportunity can only occur when all personally generated karma has been fully redeemed. The necessity of returning to incarnated life then finally ends and enlightenment is thus achieved.

Broadly considered, karma represents dissonant vibration held by the soul and stored within the causal body. Because of its presence, it inevitably forces the individual to return to incarnate life. Yet at the Fourth Initiation karmic dissonance no longer remains, for it has been entirely transformed and harmonized. Freedom from incarnation is then the soul’s sure reward.

The keynote of all initiations is renunciation. At the first initiation the disciple renounces his/her attachment to the powerful urges of the physical body; at the second, the desires of the emotion vehicle give way; and at the third the ungoverned aspects of the mind are forfeited through mental mastery. Yet when compared to the Fourth Initiation, these relinquishments are considered merely preparatory. For it is at this initiation that the causal body itself is repudiated. It is no wonder, therefore, that this initiation has been called the Great Renunciation.

Given this, it may well be asked—why would the causal body, which has acted as the storehouse of wisdom for countless lives, be destroyed? The answer to this mystifying question is found when we consider the evolutionary developments taking place as the Fourth Initiation is approached. During this time, the wisdom contained within the causal body is rapidly being synthesized into the fabric of the initiate’s beingness. Because of this, the container that has historically held the soul’s wisdom (causal body) is no longer needed. The wisdom it stored is now a part of his/her divine essence, and will be so for eternity.