The Dawning of Practical Mysticism 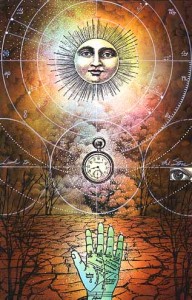 The Dawn of Practical Mysticism

Whether viewed from a spiritual or secular perspective, it is abundantly evident that humanity is in the throes of a major transition.  In every country and societal institution upheaval seems to be the order of the day, and with it much pain and suffering ensues.  This transitional period can be interpreted in a variety of ways. For some it is symptomatic of our movement from the Age of Pisces to that of Aquarius.  For those of Christian fundamentalist persuasion, the current plight of humanity gives fatalistic confirmation that the end-time draws near.  Yet in the eyes of the esotericist it is believed that we are witnessing the dawning of the Age of Practical Mysticism.

Historically, the mystical approach to God has been based upon a yearning heart and a belief in God transcendent.  Within this mindset, God is not discovered in the midst of societal activity, but in places of isolation from “the world, the flesh and the devil.”  In large measure, this is what has given birth to the Church’s long held bias toward a cloistered way of living, and the widespread existence of convents and monasteries.  The mystical way is one that rejects the sacredness of society, believing it to be a worldly distraction from establishing intimacy with the divine.

Conversely, practical mysticism recognizes that societal systems are spiritually alive.  And, just as with a human being, they too have a soul and a personality. Indeed the crises we now collectively face are rooted in a battle being waged between the soul and personality of our social institutions.  It is a clash between their higher and lower natures.  The physics governing the evolution of society is precisely the same as with an individual.  We (as well as society and its institutions) must each transform our lower nature so that it becomes a cooperative agent on behalf of the higher.  From the practical mystic’s point of view, this can only be done when we learn to inwardly reach for the stars while keeping our feet firmly grounded.

To be a practical mystic requires that we see all things as incrementally evolving from a lower to a higher order of existence.  This must be done by inwardly maintaining a mystical relationship to the divinity within, while simultaneously demonstrating a practical perspective when serving humanity.  Metaphorically speaking, escape into the safety of the forest will no longer suffice.  God is not simply understood as love (as the mystic maintains) but is recognized as a triune of purpose and love applied practically via intelligent activity.