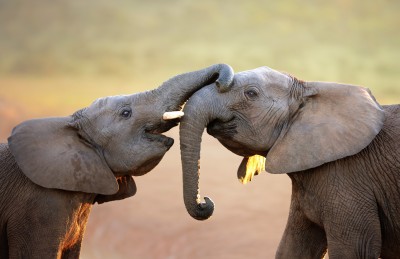 All life evolves, and does so through categories of form. This is an idea central to the esoteric understanding of Creation. The miraculous achievements of the mind have emerged only because the foundation of human consciousness was built long ago, when life was lived within mineral, plant and animal forms. Each of these three kingdoms of nature contributed to the development of various attributes of consciousness that we, as human beings, now take for granted. Yet, it is our ancient experience within the animal kingdom that is most apparent, for the legacy of our animal past is still clearly felt within each of us. The call of the wild still resides deep within the recesses of the human mind, and it is this that gives evidence to our animal ancestry.

Each kingdom in nature provides the evolving spirit with certain traits essential to the development of consciousness. To understand this, we must realize that each of Nature’s kingdoms is a category of form through which all life must evolve. The forms found within a kingdom give to the evolving spirit essential attributes. These attributes form the substructure for what will later becomes the reasoning mind, as life evolves into the human kingdom. In this regard, there are two primary attributes etched into animal consciousness. They are:

The underpinning of mind is instinct, and it first arises within animal form. Specifically, it is the category of mind that shapes the collective consciousness of a species. Through it, an animal participates in the instinctual behaviors of its kind. Instinct gives rise to collectively defined behaviors that support the perpetuation of animal life. The consciousness of an animal is not individualized, but is instead conditioned by the soul of the species to which it is a part. For example, when an animal is threatened, its survival response emerges automatically. Its capacity to reason, independent of its survival instinct, is not yet developed. As such, instinct is ingrained into the very fabric of an animal’s consciousness. This is true when considering the wide variety of additional behaviors demonstrated by any animal species. The behaviors related to mating, feeding, and social organization are all examples of instinctual activities defined by the consciousness of an animal type. Most important to our consideration, animal instincts always govern the activities of a species in support of its survival.

It is not difficult to see the remnant of animal instinct within humanity today, and this, for both the good and ill. For example, our capacity to develop complex social systems in support of human welfare is rooted in our animal past. Admittedly, humanity’s political, economic and social institutions represent complex elaborations of the human mind. Even so, upon close examination we can see that they fundamentally exist as expressions of our survival instinct; a trait built into our consciousness when animal existence was our lot. Such is an example of the positive aspects of our animal past. Considered negatively, we can see how some attributes of our animal instinct can limit us as a society. For example, the herd instinct (rightly developed in the animal kingdom) can be quite detrimental at times. Herd instinct often gives birth to the shortsightedness and over-reactivity of the masses. In addition, it is the instinctual root for the emergence of gang activity so destructively prevalent in our cities today.

In the Esoteric Tradition it is understood that the various forms of life existing on our planet are expressions of utter equality, while simultaneously being hierarchical. The equality of Life is based upon the principle that all expressions of life are cells within the One Life, which is God. In this sense, all life is sacred and equal. Yet, when we consider life as it relates to the evolution of consciousness, inequality (therefore hierarchy) emerges. For example, the consciousness of a human being is far more evolved than is the consciousness of a squirrel or snake, even though in their essential divinity they are absolutely equal. The array of life within a particular kingdom is also hierarchical, and this no matter which kingdom in nature we consider. Within the plant kingdom, for example, a blade of grass is far less evolved (in its consciousness) as compared to a rose or mighty oak tree. In addition, there are certain species of animals that are further evolved than others. Interestingly, the most evolved animal forms are those that are beginning to demonstrate devotion to greater life, namely to human beings.

Dogs, horses, cats, as well as many other species of animal, represent the most evolved life forms within the animal kingdom. Their evolutionary status is largely (though not exclusively) indicated through their close association to humans. Generally speaking, domesticated animals represent the pinnacle of animal evolution. Because of their proximity to human living, they have benefited from humanity’s radiation and aura. It is also true to say that we, as human beings, can learn much from the animal kingdom, particularly as it pertains to living in harmony with nature. A domesticated animal’s willingness to follow human direction is the key to understanding their status. The training of an animal (when lovingly done) shapes behaviors that are antithetical to its instinctual nature. For example, when teaching a dog to “stay”, we are conditioning its consciousness to resist its reactive instinct to move. As such, domestication builds new structures within an animal’s consciousness, and this quite apart from the ingrained instinct that normally governs its actions. Though these new behaviors are rudimentary, they nonetheless form the foundation for what will eventually become individualized consciousness when the animal transfers into the human kingdom in the distant future.

Domestication leads to devotion, and devotion is a special kind of love. It is the type of love that manifests as loyalty toward another. In truth, it is a form of animal affection that recognizes the greater consciousness demonstrating through the person who willingly cares for its well-being and development. This is why humanity’s responsibility toward the animal kingdom is so great. As already stated, kingdoms in nature are hierarchical, and this as measured by their scope of developed consciousness. Animal life is next to enter into the human domain when the greater cycles of time permit such entrance. Given this fact, humanity’s duty to care for and protect animal life cannot be understated. Human beings have a divine responsibility to lovingly prepare animal life with the rudiments of independent thought, in preparation for their eventual entry into the human kingdom. Wise training, based upon patient love, insures that this preparation occur without harm.

When life enters into the human kingdom, this devotional note continues to evolve. Our devotion to family, friends and nation are manifestations of this same quality implanted within us so long ago. Even our devotion to God is a part of our animal legacy. As animals we learned to supplicate to the will of a greater life (human), just as today humans supplicate to a still Greater Life (God).  For to an animal, a human being is a god. Animal husbandry is therefore a far greater responsibility than may first appear. To love and train an animal is to give it divine guidance in support of its evolution toward non-instinctual thought.

Consciousness expands as Life evolves through Nature’s great divisions (kingdoms). Life within the mineral and plant kingdoms existed for us, but the seeds of such experience have long disappeared from view. Yet, our animal legacy is still recognizable within us. We know all too well the animal still living within the recesses of our thoughts and desires. In truth, our animal instincts are both friend and foe, for they have the power to save or imprison us, and it is we who define which it shall be. For millions of years we lived as feral creatures upon the Earth. At that time, instinctual mind marked our crowning achievement. Today that same instinct is what draws us together in search of societal forms that will support humanity’s collective welfare. Most importantly, instinct serves as the foundation of individualized consciousness, which is the major developmental theme of our human existence.

Toward the later phase of our animal past, the quality of devotion toward greater life began to emerge. During that distant epoch, we unconsciously sensed a greater life expressing through the humanity of the time, and devotedly supplicated ourselves to its wise and loving guidance. That etching within consciousness is still shaping our lives today, but at a higher level of experience. We now consciously (or unconsciously) sense a greater life beyond our human existence. This grander Entity we call by many names. Some call it God, while others refer to it as Brahman, Universal Intelligence, or simply the Laws of Nature. Whatever the title, humanity devotedly supplicates to this Greater Being. In truth, it was when we lived as animals that the seeds of this tendency were implanted within us. Such is the great gift bestowed upon us so very long ago, for it gave to us the ability to yearn for the greater expressions of Life.

Biographical Information:
William Meader is an author, teacher and counselor. Much of his work is focused on the subjects of Spiritual Creativity, the Evolution of Consciousness and the Art of Meditation. At present he is teaching in the United States, Canada, Europe, Australia and New Zealand. He resides in Oregon, and can be contacted through his website at meader.org.